Back to all posts

One of our favorite stories in our book, "He is Faithful," was written by our friend, Kathy Murphy, and took place at Christmastime. There are a lot of people praying this Christmas that God will come through for them, we're sharing this story- just for you:

God is Faithful. Several years ago, my husband, Dennis, and I lived in Minnesota, but our family all lived in St. Louis. On holidays and special occasions, we would travel south to celebrate and visit. My children had all moved back to St. Louis to start their families, and I was in a depression that only women that have experienced an “empty nest” can truly understand.

I was looking forward to seeing my children and grandchildren, who hold a very special place in my heart. As is typical with pastors of small churches, we were struggling financially and probably shouldn’t have tried to make the trip. It was Christmastime, and I really wanted to be with my family. Driving through Minnesota and Iowa can be especially harrowing in the winter. We had been driving through bitter cold and snow for about six hours when we decided to stop for the night to rest and get off the highway in Cedar Rapids, which is halfway to St. Louis from our home in Minnesota.

After a good night’s sleep, we got up early to continue the trip. It was Christmas Eve, and we really wanted to make it there before evening. It was extremely cold in Iowa, and all kinds of weather records had been broken overnight. I think the wind chill was -35 with a temperature of about -10. We had been driving for about 10 minutes when the car started shaking and coughing, making a horrible noise. We got off at the first exit at a little gas station with an A&W attached to it. The car stopped there and wouldn’t go any further as it spewed out all kinds of stuff from the tailpipe and engine.

Apparently, my husband didn’t check the anti-freeze, and the radiator was cracked. I was beyond frustrated, and I was really upset at my man. While he was trying to pour things into the engine, I was sitting in the extremely cold car, but my anger was so hot that I didn’t even feel the temperature! I started to cry and pray and ask God, “Now what?” We had no extra money to spend on car repairs, let alone funds for another night at the hotel. Since it was Christmas Eve, there was hardly anything open in Cedar Rapids, and no one that would be able to tow us.

Our daughter is married to a very talented man who can fix anything mechanically. He would be the guy you would want with you during a disaster. He can figure out anything, so my husband called him to get advice. My son-in-law, Larry, is a great man but was on the fence about Christianity. We were the only Bible he read. When Dennis told him what was going on, he snidely remarked, “Where is your God now?”

My son in law said he would make a few calls and maybe drive up to get us. While we were waiting and pondering what to do, Dennis remembered that a church member’s parents, Jerry and Gwen, lived in Cedar Rapids. We had met them before (that is another story for another time) so, Dennis called Jerry and explained our situation. Jerry told Dennis that he would call him back, that he had something to do. About 10 minutes later, Jerry called and told us that a tow truck was on its way. He had also rented us a car for a few days, and he was going to have the car repaired! He said he would be there to pick us up and we were going to have lunch with him and Gwen.

Jerry explained to us that, right before Dennis called him, he and Gwen were having a conversation about a bonus that she received from work, and they wanted to bless someone with their abundance. When Dennis called, he and Gwen knew that it was a “God thing,” and they knew that is how they were supposed to spend her bonus.

It has always been so hard for me to accept any gift or help from anyone. When I protested, Jerry told me that I would be taking away the blessing they were receiving for helping us. We were so humbled and thankful for their generosity! This wasn’t a small gift! They put a new engine in our car, paid for towing, and sent us on our way with a rental car (which, by the way, was the same make and model as our car, except newer).

Within two hours, we were on our way to spend Christmas with our family. Dennis called to tell my daughter what had happened. When Larry, her husband, answered the phone. Dennis said to him, “God just showed up.” 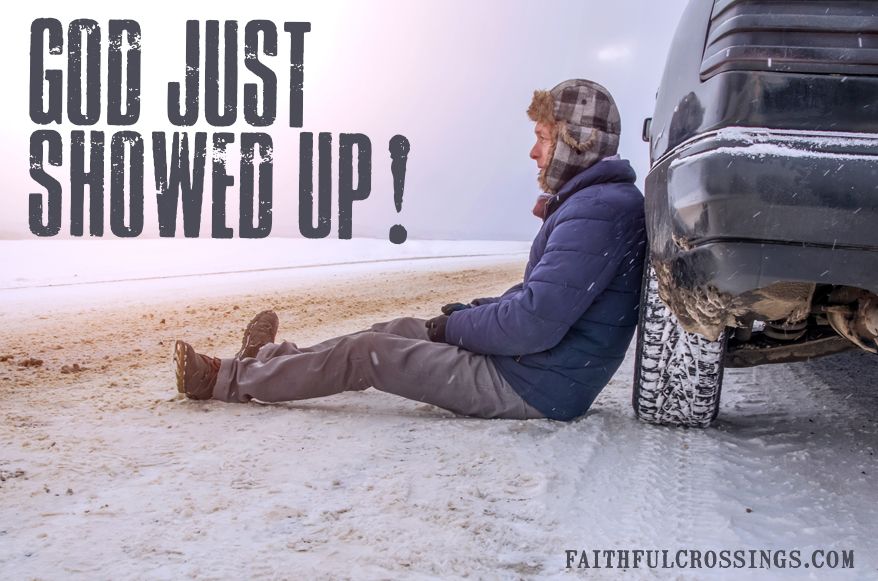